Home Fact in Fiction The Things You Learn Doing Research

The Things You Learn Doing Research 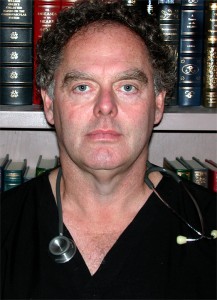 Writers are constantly doing research to make the story at hand more realistic, or at least more believable. That “willing suspension of disbelief” thing. One false move can yank the reader right out of the story and that’s never good. The reader loses confidence in the author and the connection to the story becomes frayed, or worse.

So research is critical.

The thing about on line research is that you can literally stumble on the most amazing stuff. Sometimes it’s what you were looking for but not necessarily what you expected, at other times it’s far afield. 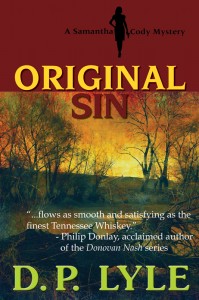 For my latest Samantha Cody thriller ORIGINAL SIN I needed to research snake-handling preachers. I grew up in the South so such sects were not necessarily foreign to me—-though I’ve never visited such a church. Snakes? Not my thing.

But as I rummaged around, I discovered that these groups are not all that rare and they aren’t confined to the South. They can be found as far away from Appalachia as Denver and Alberta and British Columbia, Canada.

Much of the rationale for these beliefs stem from certain passages in Mark 16:

17: And these signs shall follow them that believe; In my name shall they cast out devils; they shall speak with new tongues;

18: They shall take up serpents; and if they drink any deadly thing, it shall not hurt them; they shall lay hands on the sick, and they shall recover. 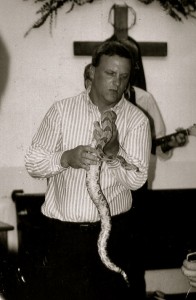 From these words snake-handling, speaking in tongues, and the sipping of strychnine (yes, strychnine) were ordained. The handlers often feel that no snake and no poison can harm then so when bitten, they refuse medical help and trust the Lord to save them. Sometimes He does, other times He doesn’t. More than one preacher has died at the hand, or fang, of one of his snakes. One famous case was the 1998 death of John Wayne “Punkin” Brown who died from the bite of a four-foot Timber Rattler. Accidents do happen.

While researching these sects, Google directed me to Amazon and a book titled, SALVATION ON SAND MOUNTAIN: SNAKE HANDLING AND REDEMPTION IN SOUTHERN APPALACHIA by Dennis Covington. Sand Mountain is maybe 40 miles from where I grew up in Huntsville, AL, so how could I not click the “Look Inside” button? I began to read, expecting a sloppy and poorly written tome. Was I surprised. The writing was strong and the story compelling. I then discovered that the book had been a National Book Award Finalist. I immediately purchased it.

It is a fascinating story of a newspaper reporter who travels to Sand Mountain to investigate the case of Glen Summerford, pastor of the Church of Jesus with Signs Following, and his attempted murder of his wife with—-what else?—-a snake. But Covington finds himself drawn to the church and only with great effort could he pull himself and his wife away.

The things you learn doing research.

D. P. Lyle is the Macavity and Benjamin Franklin Silver Award winning and Edgar, Agatha, Anthony, Scribe, and USA Best Book Award nominated author of both non-fiction and fiction (the Samantha Cody and Dub Walker thriller series and the Royal Pains media tie-in series). Along with Jan Burke, he is the co-host of Crime and Science Radio. He has served as story consultant to many novelists and the screenwriters of shows such as Law & Order, CSI: Miami, Diagnosis Murder, Monk, Judging Amy, Peacemakers, Cold Case, House, Medium, Women’s Murder Club, 1-800-Missing, The Glades, and Pretty Little Liars.