So. The Writing Life. Or, as I insist on calling it, the good life. And not the “good life” that Jerome Bixby wrote about in his infamously horrific short story (later filmed as a Twilight Zone episode  with Bill Mumy—remember it? But I digress …). Maybe more like the good life of the Tony Bennett standard …

Sadness? Even after publishing?

Well, yeah. It is life, after all. And writing and publishing is a journey that, if we’re lucky, is without end, leading to unexpected highways and byways. You celebrate the triumphs, face down the fears, and when you’re sitting in front of your computer, worrying about sales and new contracts and whether or not the 85,000 words you just finished actually make sense, and how you’re going to reach new readers, and whether you should take out a Facebook ad or a print ad or how to make a video go viral without paying someone from Jersey Shore to be in it and wondering whether you’re going to get trashed in an online review the next time you open up a Google Alert, you can get a little sad. That’s not why you got in the business … but once you’re in, you deal with it.

For me, it happens when someone tells me they hate history but love my novels. When I get an email from someone telling me they can’t quit thinking about CITY OF DRAGONS. It happened recently when I met a librarian from an inner city middle school for gifted but poor kids, and she told me I was her students’ favorite writer.

High moments, those. We cherish them and store the gold dust in a memory jar.

It’s the good life, to be free and explore the unknown …

And we do, don’t we? We sail backwards in time, fly ahead into the future. We travel the world, know the intimate secrets and lives and histories of our characters, paint words in ways we hope are unique and exciting, try to thrill and chill our readers, carry them away with us on a magic carpet for 300 pages. We explore the unknown and we do so alone at first, hesitating, and eventually the world is shaped. Then we offer it up … and hope it’s accepted.

That’s an amazing gift. A privilege … and a responsibility. 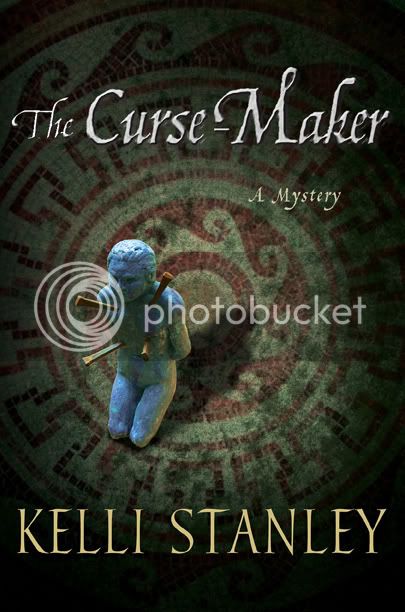 So here I am, with THE CURSE-MAKER released, the follow up to my debut novel and first series. In September, CITY OF SECRETS will be out, the sequel to CITY OF DRAGONS.

And I’ll continue to write as well—and as fast—as I can, because I’ll keep chasing … the good life.

Her newest book THE CURSE-MAKER just released on February 1st. Booklist starred: “…an engrossing mystery … Stanley serves up fascinating and never heavy-handed information on Roman life.” Her novels include CITY OF DRAGONS, NOX DORMIENDA, and CITY OF SECRETS (September, 2011). “Children’s Day”, a prequel to CITY OF DRAGONS, was published in the International Thriller Writers anthology FIRST THRILLS: HIGH OCTANE STORIES FROM THE HOTTEST THRILLER AUTHORS.  You can learn more about Kelli and the worlds she creates here, friend her on Facebook or follow her on Twitter.