When the time came for me to create a series character, I knew right away that whoever that character might turn out to be, he’d have to be from Boston.

Nick Heller, as he turned out, is, like me, an adopted son, rather than a native — and all the more devoted because of it. Born to great wealth, having spent his childhood on a vast estate in Westchester County, Nick moved to the Boston area as a preteen, after his father was sent to prison for fraud, and the family’s fortune disappeared. Nick’s mom took her sons back to her own hometown of Malden, a middle-class suburb just north of Boston. Nick roots for the Red Sox, and the dirty water of the Charles River runs through his veins.

Almost immediately, however, I ran into a problem. The plot I had developed for VANISHED, Nick Heller’s debut, was an old-school Washington thriller: 1970s-style political conspiracies, kidnapping, corrupt defense contractors and more. It simply wouldn’t work in Boston. VANISHED, therefore, finds Nick living and working in Washington, and ends with his move to Boston to set up his own firm, Heller Associates.  So the second Nick Heller novel, BURIED SECRETS, begins with Nick living in Boston, and taking on a case for his mother’s former employer.

Even though I wasn’t born in Boston and don’t have the accent, I’ve lived here longer than any other place. It’s my hometown.  I root for the Sox and the Bruins and the Celtics, and I defend the city vehemently against the slings and arrows of New Yorkers.  When Whitey Bulger was nabbed a couple of days ago after 16 years on the lam, I felt like old family business had finally been settled.

And of course, Boston is a great setting for a thriller. Anyone who’s seen a movie or watches TV is familiar with its landmarks and the accent and its character and beauty. Boston has a unique look and feel — the cobblestones of Beacon Hill, the three-deckers of Dorchester and Southie, the splendor of Commonwealth Avenue, the North End, Harvard Yard . . . . you name it, it’s got it. Mobsters in Charlestown! Snooty rich people! Vegans in Cambridge!

Granted, I’m not exactly the first to see Boston’s potential as a setting for crime fiction. George V. Higgins was among the earliest, with his legal thrillers and the classic THE FRIENDS OF EDDIE COYLE. My old friend, the late and much lamented Robert B. Parker, was right behind him, sending Spenser for hire down Boston’s mean streets. Dennis Lehane, also a pal, gave Patrick Kenzie and Angela Gennaro an office in Charlestown and set MYSTIC RIVER in a fictional town that seemed a lot like South Boston and Dorchester combined.

For the most part, however, these fictional detectives work a darker side of the city than I know. I moved to Boston as a graduate student (yeah, Harvard), and my Boston’s not quite as brutal (except maybe in rush hour traffic). The Boston I know is the tree-lined streets of Cambridge, the historic townhouses of Back Bay, the glass canyons of the financial district, and the middle-class, white-collar suburbs like Framingham and Natick. This is Nick’s Boston, too.

That’s not to say that Nick doesn’t move through other parts of the city as well. In fact, tracking Nick’s movements through Boston is part of the fun of writing the books. When Nick needed to find an office, for example, I decided to find one for him — a real one. I knew just the kind of place he’d want: open, a little rough, semi-industrial, maybe a kind of loft space. I found it at the old Chadwick Lead Works at 184 High Street and described it like this in BURIED SECRETS: 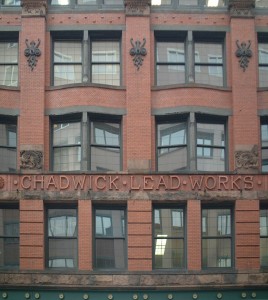 … an old brick-and-beam building in the financial district, a rehabbed nineteenth-century lead-pipe factory. From the outside it looked like a Victorian poorhouse out of Dickens. But on the inside, with its bare brick walls and tall arched windows and exposed ductwork and factory-floor open spaces, you couldn’t forget it was a place where they actually used to make stuff. And I liked that.

It helps me to be able to set fictional characters in real places, although I often change the names so I can give the real-life settings features my story needs. Alexa Marcus, the girl whose kidnapping sets BURIED SECRETS in motion, meets her attacker at a bar I call Slammer, in a luxury hotel that used to be a jail. I call my hotel the Graybar; it has a real-life counterpart in Boston’s Liberty Hotel, the former Charles St. Jail, where the dark and stylish bars are called Alibi and Clink.

Alexa’s best friend is a Senator’s daughter who lives on Louisburg Square, the most exclusive part of Boston’s most exclusive neighborhood, Beacon Hill. One of Massachusetts’ real Senators may live there too, although he shares nothing else in common with my fictional Senator Armstrong. Nick’s search takes him from Louisburg Square to the Boston field office of the FBI, a distance of less than a mile but a world or two.

There Nick meets his old flame, Diana, and gives her a ride to her apartment in Boston’s South End, which is only two miles away but another radically different area: a gentrified place of brick rowhouses and great restaurants. Later Nick heads out to visit his mother in Newton, a suburb on the far side of Cambridge that’s less than 10 miles from downtown but might as well be New Jersey. His client, rogue financier Marshall Marcus, lives in Manchester-by-the-Sea, a town on Boston’s North Shore. Manchester, about 30 miles from downtown, is a vacation paradise for the very wealthy, renowned for its beaches and a world-class yachting harbor. Nick’s colleague Dorothy lives in Mission Hill, a historic district right in the middle of the city that’s become a model for urban renewal, and Nick himself lives in the Leather District—a name that refers to nothing kinky, but to the tanneries and shoe factories it used to house.

In fact, the ambitious reader could map out a walking tour of Boston from BURIED SECRETS alone. If Nick’s career lasts long enough, maybe they’ll even put his office on a Duck Tour someday.

Joseph Finder is the internationally-bestselling author of nine novels, including the ITW Thriller Award-winning KILLER INSTINCT. His newest book, released this week, is BURIED SECRETS, the sequel to the ITW Thriller-nominated VANISHED. Both books feature international security consultant Nick Heller, a “private spy.” Joe’s novel HIGH CRIMES became a hit movie starring Ashley Judd and Morgan Freeman, and his 2004 bestseller PARANOIA is currently in development as a major motion picture. His first short story, “Neighbors,” recently appeared in the collection AGENTS OF TREACHERY. Joe lives in Boston with his wife and daughter, and Mia, a needy golden retriever.