Home blog Monsters Who Have Touched Our Hearts

Monsters Who Have Touched Our Hearts

For WANTED UNDEAD OR ALIVE, we interviewed tons of experts about the struggle of good vs evil in film, comics, pop culture, world myth, literature, and the real world. Here’s what some of them have to say about which monsters in film or mythology touched their hearts.

DOUG SCHOONER—King Kong was always my favorite. He was taken away from what he knew, his home and life to a place where he

was a monster, a novelty and a tragic victim of his captors. The love story is there to humanize the beast so we can relate better with his loss and solidify the monster to our own perspectives. Most great stories involve a monster who is a hero and a hero who is a monster.

DOUG JONES—Frankenstein’s monster is about as sympathetic as it gets, I think. This poor fellow wakes up on a table to realize he’s been built with spare parts and is an immediate outcast of whom people are terrified. I woke up feeling that way almost every day of high school.

ELLEN DUBIN—I was obsessed with Greek mythology in college. I always had a soft spot for the characters that were misfits, like the Greek god Hephaestus (Roman equivalent Vulcan). I was fascinated by the fact that he was the only god exiled from Mt Olympus because he was born lame, deformed and ugly. A monster in the eyes of his mother and father, they threw him off the mountain nine days after his birth! But irony of ironies, he eventually created the magnificent metalwork and intricate equipment of the gods. Beauty was created by that “beast”. Ping go the strings of my heart! King Kong and Quasimodo both had that same affect on me. 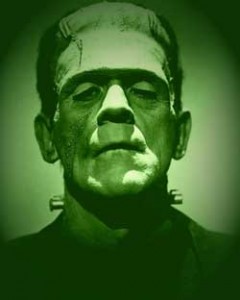 CHAD SAVAGE—I think we all felt sorry for Frankenstein’s monster, and I remember as a kid feeling bad for Godzilla at the end of GODZILLA VS. MOTHRA. Clive Barker’s NIGHTBREED is an excellent examination of “what defines a monster”, as the humans are far more dangerous than the so-called monsters; same goes for Neil Gaiman’s THE GRAVEYARD BOOK. I also found myself rooting for Natasha in Tim Lebbon’s BERSERK.

KELLY J. COMPEAU—Frankestein’s monster. That poor, pathetic creature never had a chance in the face of such superstitious fear and intolerance. I also feel that Count Dracula is deeply misunderstood. The guy just can’t get a break!

BRIAN PATRICK O’TOOLE—The original GODZILLA was the film that taught me that good and evil was not as black and white as they were made out to be in church. I was about five or six years old when I caught GODZILLA showing on WGN-TV Chicago’s “Creature Features”. By the end of the film, I was a crying mess. I remember my mother saying, “What are you so upset about?  They got the monster.” I turned to her, tears turning to anger, and screeching, “Godzilla was just going home. It’s not his fault people put up buildings where he used to live.” And from that moment on, I watched horror/sci-fi/fantasy films, looking for the heart of their story. Frankenstein’s Monster didn’t ask to be created. King Kong didn’t ask to be brought to New York. The Mummy was simply protecting his Queen. The Werewolf was cursed. The shark in JAWS was just feeding. Zombies were just following their basic instincts. In every film I make, I am highly aware of the “heart” of the story I am trying to tell. That was something I learned from GODZILLA.

Doug Schooner is an artist who also plays guitar and writes.

Doug Jones is an actor who plays ‘Abe Sapien’ in the Hellboy films, among other works.

Ellen Dubin portrayed Giggerota the Wicked on LEXX and appeared in THE COLLECTOR, Highlander: The Raven, and Forever Knight

Chad Savage is the artist behind Sinister Visions inc., a full-service visual design studio catering to the horror, Halloween and haunted house industries.

Brian Patrick O’Toole is a screenwriter and independent producer whose works include DOG SOLDIERS and CEMETERY GATES. He writes the monthly HORRORCADE column for FANGORIA magazine.