In my paranormal suspense novel, A HUMAN ELEMENT, book 1 in the Element Trilogy, Laura Armstrong can perform telekinesis.

What exactly is telekinesis? It’s the action of mind on matter, in which objects are caused to move as a result of mental concentration upon them. Is it science or fraud? Akin to seeing spirits or not? And if one believes in ghosts are they inclined to believe in other paranormal phenomenon too, like telekinesis?

Another term grew from telekinesis: psychokinesis. PK, as it’s known, encompasses a wider group of mental force phenomena that telekinesis now falls under. PK Parties were a cultural fad in the 1980s where groups of people were guided through rituals and chants to awaken metal-bending powers. Or perhaps it was just another excuse for a party! Either way, you can read about it from PK party founder, Jack Houck. Real or fake? You decide. 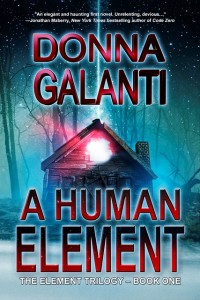 The psychokinesis phenomenon dates back to early history though. In the Bible, for example, Jesus is described as creating water into wine, healing the sick, and multiplying food. And it’s throughout pop fiction today, like Stephen King’s CARRIE. Hollywood gives us POLTERGEIST.

Ouija boards were also a PK fad. I had a frightening experience with one when I was eleven years old. A friend and I channeled an “evil spirit” through the board who levitated the ouija’s movable indicator. The spirit told us to find a boulder in the woods with an “X” on it. That would be where we would find hidden green treasure. We found the boulder but the only green treasure we found was the angry, green icy flow of the raging creek that nearly swept us away that February day. That was my last attempt to play with a ouija board. It scared the devil out of me, literally it seemed!

Most scientists believe that the existence of telekinesis has not been convincingly demonstrated. I’m not sure what I believe, but I do think there are amazing discoveries about how the brain works to still be found. I do know I will never touch a ouija board again.

As well-crafted paranormal novel (for me) can include elements that range beyond scientific explanation and blend other genres together such as fantasy, horror, and science fiction. The fantastic thing about writing paranormal is that there are so many avenues of paranormal to write about including psychic powers (my favorite!) or ghosts, time travel, or vampires.

And writing in the paranormal allows me to tap into the “what if”. What if we possessed the power to do the unbelievable? Like telepathy, telekinesis. And what if we could use those powers to heal – or to kill? 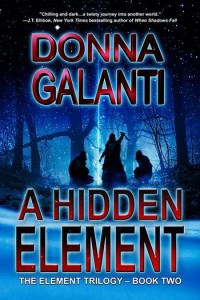 Some people like to imagine that aliens would have such power, as eluded to in book 2 of the Element Trilogy out this month, A HIDDEN ELEMENT, but what if it was inside us all along and we just had to tap into it? And what if we could get people to follow us through mind tricks and do whatever we wished? Like a cult.

Cults have always fascinated me and how one person can inspire people to do terrible things. My cult fascination began with the horrifying story of Jim Jones played out in the news when I was a child, and a cult community is the dark setting for A HIDDEN ELEMENT.

I believe we can make the impossible possible with our brain powers, if we open our minds to finding a way. Discovering these new powers would call for great responsibility but bring with it the possibility of great hope – and also great avarice.

What do you believe?

About A HUMAN ELEMENT:

Evil comes in many forms…

One by one, Laura Armstrong’s friends and adoptive family members are being murdered, and despite her unique healing powers, she can do nothing to stop it. The savage killer haunts her dreams, tormenting her with the promise that she is next. Determined to find the killer, she follows her visions to the site of a crashed meteorite in her hometown. There, she meets Ben Fieldstone, who seeks answers about his parents’ death the night the meteorite struck. In a race to stop a madman, they unravel a frightening secret that binds them together. But the killer’s desire to destroy Laura face-to-face leads to a showdown that puts Laura and Ben’s emotional relationship and Laura’s pure spirit to the test. With the killer closing in, Laura discovers her destiny is linked to his, and she has two choices—redeem him or kill him.

Praise for A HUMAN ELEMENT:

“Be afraid. Be very afraid. And be utterly absorbed by this riveting debut that had me reading till the wee hours of the night. A thriller star is born.” –M.J. Rose, International bestselling author

ABOUT DONNA:
Donna Galanti writes murder and mystery with a dash of steam as well as middle grade adventure fiction. She is an International Thriller Writers Debut Author of the paranormal suspense novel A HUMAN ELEMENT, A HIDDEN ELEMENT (August 2014), the short story collection THE DARK INSIDE, and JOSHUA AND THE LIGHTNING ROAD (Books 1 and 2, 2015). She’s lived from England as a child, to Hawaii as a U.S. Navy photographer. She now lives in Pennsylvania with her family in an old farmhouse. It has lots of writing nooks, fireplaces, and stink bugs, but she’s still wishing for a castle again—preferably with ghosts. Check out Donna’s blog and connect with her on Facebook, Twitter and Goodreads.