I love to do research for my books. Sometimes, and on certain days, it’s my absolute favorite part of the writing process.  First, I never know what I’m going to find.  Second, I truly never know what I’m going to find.  (You can see I’m passionate on this point.) Research is always a grand and exciting surprise.  I remember when I was working on Peony in Love I went to the UCLA Research Library to look up some things on burial rights in 17th-century China.  There I was, minding my own business, when all of a sudden the custom of ghost brides and ghost marriages jumped off the page.  This old Chinese tradition stems from the idea that even in death you should be married.  So if a daughter died before she could marry, then her parents would have an actual marriage ceremony with a procession, a banquet, gifts, a real groom, the whole shebang.  In this way, the dead child would be happy in the afterworld and not cause trouble for her family here on earth.  I read that and thought, Oh, I have to have one of these. Finding out about ghost weddings completely changed the plot of the novel. 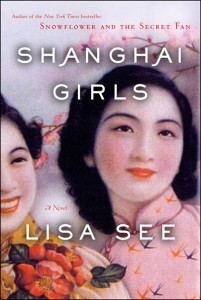 Sometimes I do research to confirm one small detail in a novel, and it becomes a big adventure without a huge payoff other than having learned some interesting – but ultimately pretty useless – information.  For Shanghai Girls, I knew that Shanghai was bombed on August 14, 1937.  I knew as well that Pearl and May, my main characters, would flee from Shanghai, head south to Hong Kong, and eventually take a boat to San Francisco.  Members of my own family had made that trip from Hong Kong to the United States on the Pacific Mail Steamship Line, so I wasn’t worried about accuracy or which boat to chose.  Seemed easy.  Nothing to worry about.  Except I am a worrier and an insomniac.  So one night I’m awake and worrying.  How long was the Pacific Mail Steamship Line in business?

There’s nothing like those early morning hours between, say, two and three a.m., to do research alone in your house.  Here’s what I found: The Pacific Mail was sold when Congress decided that railroad companies couldn’t own shipping lines too.  The Dollar Steamship Line bought the Pacific Mail to relieve the parent company of monopoly issues.  Later, the Depression hit.  Things got so bad that the U.S. Maritime Commission eventually took over the Dollar Line.  But just before that happened, Pearl and May, my fictional characters, leave Hong Kong on November 2, 1937 on the last real-life commercial voyage of the President Coolidge.  (This meant, among other things, that I had to figure out what Pearl and May would be doing between August 14 and November 2.) The President Coolidge was later conscripted into World War II and was sunk by the Japanese.  Most of this information I didn’t use, but I loved it.  And I think readers sense that, even though every single detail isn’t in one of my books, I would know the answers if they had any questions.  To me, all the stuff I don’t use is like a hidden foundation that supports the entire structure of the novel.

But no source of research is more valuable than the actual stories of real people.  I’ve relied on oral histories and interviews for every book I’ve written, including my mysteries.  For Snow Flower and the Secret Fan, I interviewed the oldest living nu shu writer.  For Peony in Love, I found first-person accounts written by those who had survived the Ming-Qing Transition and the so-called Cataclysm that occurred in Yangzhou.  For Shanghai Girls, I used the oral history project that the Chinese Historical Society of Southern California had done in 1977.  I knew many of the people who’d been interviewed.  Most of them are gone now, but I could hear their voices once again.  I can’t tell you how many questions they answered for me. 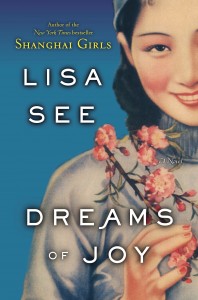 For Dreams of Joy, the sequel to Shanghai Girls, I was challenged by the facts that China was closed in the years I was writing about, that many people in China died from starvation during the famine that resulted from the Great Leap Forward, and that what was written in those days by the Chinese was very much in the rah-rah-People’s-Republic-of-China vein.  But when I start to do research, people and things begin to present themselves in interesting ways.  Out of the blue, a woman wrote to me on my fan web site to say that she’d enjoyed Shanghai Girls, because she’d lived there herself in those years…and even after China closed.  Over the next few months, she gave me incredible details about how her family – Westerners – made bread and butter, bought old cosmetics leftover from the good old days instead of the new pungent Soviet lipsticks and creams, and what they could see on the streets and in store windows of the New China.  This was only the beginning of the help I would receive from total strangers, who were willing to share their stories with me.  Another woman told me about how her mother had escaped China with three small children.  People especially wanted to share their stories of suffering, fear, and escape.  As for those rah-rah-China texts, they came in handy too.  I loved the little pamphlets I found on marriage in the New China, since so much of Dreams of Joy is about the difference between wishful thinking and reality.

Dreams of Joy isn’t even out yet and I’ve already begun doing research for the new book.  I’ve been reading transcripts of interviews of people who were singers and dancers in the Chinese nightclubs in New York and San Francisco in the 1930s and 1940s.  Characters and plot ideas are forming in my head.  And the voices from the past – with all the fun lingo of show business in those days tinged with the Chinese-American experience – are inspiring me to keep looking and digging.  I’m having so much fun.

Lisa See is the author of the critically-acclaimed international bestseller, Snow Flower and the Secret Fan (the movie will hit theaters in July). Her other bestselling books include Peony in Love, Shanghai Girls and Dreams of Joy (in bookstores today). She was named the 2001 National Woman of the Year, by the Organization of Chinese American Women. She lives in Los Angeles.